Matsuso will be introduced on “NHK WORLD”, a NHK webTV broadcast geared towards foreigners.
It will be broadcasted several times from July 2nd to July 3rd, on a program called “Artisan x Designer”. 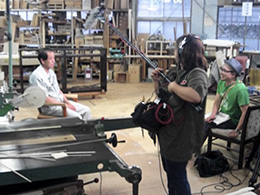 It is a feature on the Nadia works, created in collaboration with Japanese designer Jin Kuramoto. Discussed are the thoughts and intentions of the designer towards the design, the technique of the craftspeople, and the production background. It is a substantial program of about 30 minutes on such things as the arrangements between the designer and the craftspeople.